Visiting the south rim of the Grand Canyon must be on your bucket list.  Pictures of it are a dime a dozen, but they are no substitute for being there.  Being there is an experience.  Par excellence.  There is no substitute.  Everyone who attempts to describe it must inevitably fail, so I won’t even begin to do so.  Just go there.

My primary reason for visiting the Grand Canyon was to hike rim-to-rim.  I would start at the south rim, hike down to the Colorado River and ascend to the north rim.  After an easy day atop the north rim I would return to the sound rim via a slightly different route on the third day.

My secondary reason for visiting the Grand Canyon was to explore some of the secondary hiking trails with a view to going back some day to places that ordinary tourists do not even suspect exist.  As will be explained later, I abandoned this goal and ended up with very tame but still enjoyable walks along the south rim.

The first thing you should know about hiking into the canyon is that there are numerous signs on the south rim warning against doing just that.  They use very severe language.  Here are just a few: 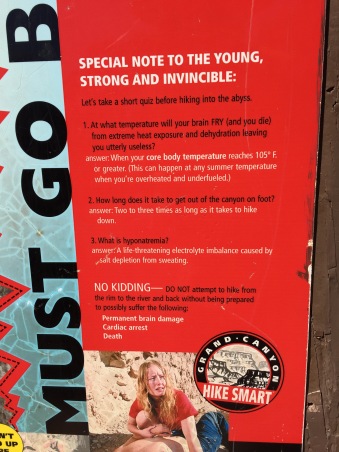 Which question gives a wrong answer?

Far be it from me to foolishly cast them aside.  But I wasn’t going to hike back to the originating rim in one day.  No, not me.  After hiking from the rim to the river, I would hike across the canyon and then up to the opposite rim.  (Then two days later, I would reverse direction and hike back to the originating rim.)  See; I’m safe.  P.S. If you suspect I’m acting like an idiot, you must read my warning.

So I headed down the South Kaibab Trail, thusly … 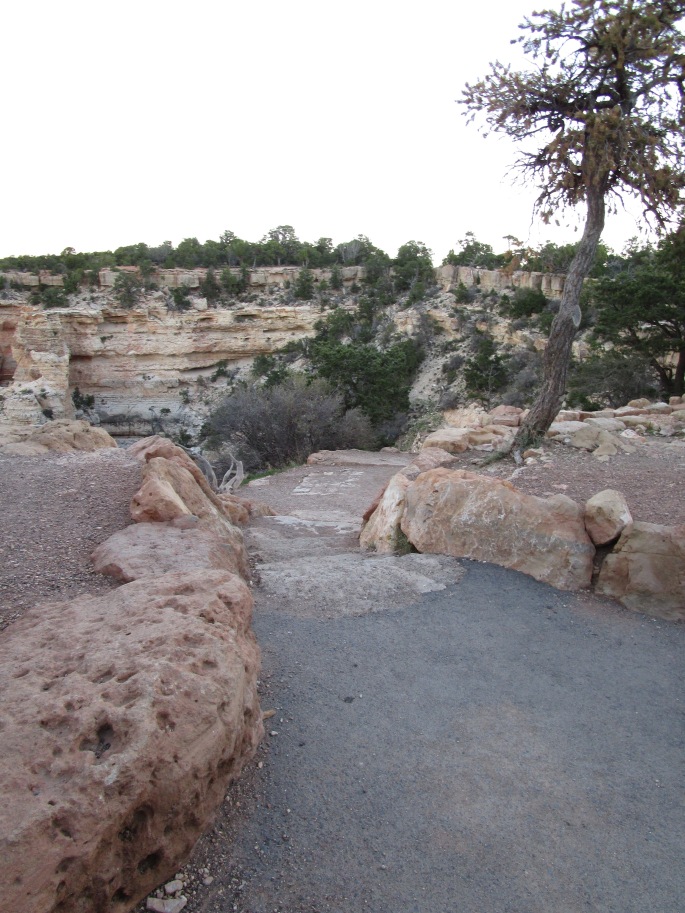 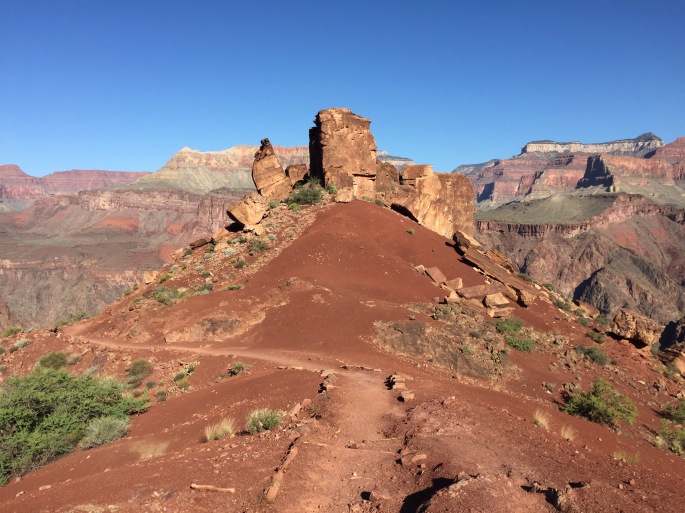 The next threes pictures are somewhat out of place.  They were taken on the return journey, when I took a side trip from Bright Angel Trail (only a couple miles from here to the NE) to Plateau Point.  Although the latter trail is plain as day, I bet the large majority of hikers don’t go there.  Too bad for them.  The view at the end might have been my most exhilarating view at the Grand Canyon.  It certainly was the most surprising.

After spending a day wandering around the north rim, I hiked back to the south rim.  Then, to my surprise, my adventure seemed complete. Although I had planned to hike some of the major secondary trails, something inside of me felt that I was done.  In a few days I would be driving home.  For perhaps the first time in this adventure, I decided to take it easy.  I was actually ready to go home then, but I lingered.  I primarily walked the Rim Trail from end to end (an easy and rewarding journey if you ever go there) with a few other short trips thrown in for variety and shopping.  Below are some pictures that do not fit into the grand narrative of a rim-to-rim journey.  I think they’re worth showing, but they are rather disorganized.